Both formations the foundations of western warfare

The organization from Homeric style hero warfare to tightly packed hoplite warfare was world changing. This powerful Hellenic formation allowed the ancient Greeks to hold off the powerful Persian invasion and spread Hellenic culture throughout the Mediterranean. The Macedonian phalanx took the concept of cohesive group warfare to another level with the sarissa armed phalangites and under Philip and Alexander, steamrolled every opponent in front of them.
While Alexander’s empire grew and fragmented, The Romans were busy with their arduous task of conquering Italy. Initially adopting a hoplite style phalanx due to influence from Southern Italian Hellenic colonies, the army eventually transformed into the flexible manipular legion. This transformation was likely a result of the Samnite wars fought in the varied mountainous terrain of central Italy where the Romans needed a more adaptable formation. The Roman manipular legion and the Macedonian phalanx were each pivotal factors in the successes of their states, but was one formation actually better than the other?
The best descriptions of the formations come from the historian Polybius. Raised in ancient Greece, Polybius fought in Hellenic battles before being sent to Rome as a hostage, though he was given great freedoms during his stay. In Rome Polybius studied Roman warfare and so had experience with both phalanx and maniple style warfare. 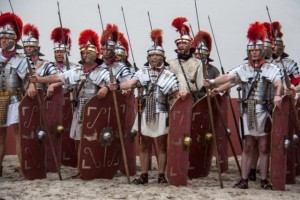 In his histories, Polybius directly address the strengths and weakness of both formations. For the phalanx, the sixteen-man deep formation had the first five ranks with their spears extending out of the formation while the remaining ranks held their spears upright or at an angle to deflect missiles. The tight formation with the average phalangites taking up a frontage of three feet meant that, theoretically, the average soldier, who needed twice the frontage to operate with sword or spear, faced a total of ten spear points.
Not purely a defensive formation, the phalanx could advance forward with pikes churning through virtually any opponent with ease. Polybius states that the biggest weakness of the phalanx is its uselessness in rugged terrain, but we know that under competent leadership the phalanx had won victories even while crossing rivers. 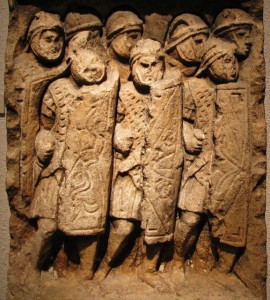 The Roman manipular formation was quite a unique layout. With three lines, one behind the other the Romans deployed in separate maniples with each line having a maniple-sized gap between units, with those gaps covered by the next line back creating a checkerboard formation. The exact method of this formation engaging in battle has been questioned due to the large gaps, but it seems that the gaps remained while engaged to allow the rear lines through to support when needed.
There are several key differences in the formations. The maniple was fluid, with each maniple led by centurions who were encouraged to take initiative and lead by example. The phalanx was much more rigid, but overwhelmingly powerful in a frontal assault. The individual soldier of the phalanx was tied to the cohesion of his unit, but had the safety of multiple spearheads between the front row and the enemy.
The individual Roman had more room to operate, with a large shield and effective sword allowing them to confidently engage and defend individually and as a group by locking shields. The javelins thrown by the maniples were also an effective formation breaking tool used to lessen the impact of enemy charges or create holes to exploit with their own charge.
The two formations actually met in battle a handful of times with varied results. The first combats were during Pyrrhus’ invasion of Italy in 280 BCE. Three major battles were fought with the first two being Pyrrhic victories for Pyrrhus. At Heraclea and Asculum the tried and true Macedonian phalanx faced the Roman maniple that had only been established 40-100 years before. 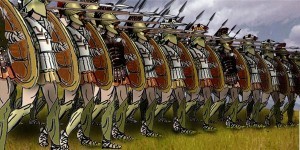 Pyrrhus won these battles but the maniples put forth a valiant effort and caused heavy casualties. At the battle of Beneventum a few years later the Romans finally prevailed, with help from Pyrrhus’ elephants which charged back into his own lines. Details for these battles are scarce but while it seems that though the phalanx did indeed steamroll through the Romans, it was done with great difficulty and at Beneventum the flexibility of the maniples allowed them to seize the openings made by the rampaging elephants to cause a rout.
After Pyrrhus’ invasion, the Romans fought titanic wars against Carthage that brought them to superpower status in the Mediterranean. Barely after wrapping up the second Punic war, the Romans invaded Macedon to take the fight to Philip V, who had been an ally of Carthage and was now harassing Roman-allied Hellenic cities. The armies of Rome and Philip’s phalanx army met at Cynoscephalae, with a large hill separating the two camps.
Philip decided to take the initiative and marched out first with the right half of his phalanx, so that they could take the hill and attack downhill. As the Roman left met them and held firm, the Roman right marched up the hill in order to deny the rest of Philip’s army the downhill advantage. While advancing an unnamed officer noticed that they were marching right past the vulnerable rear of the Macedonian right phalanx and peeled off a large enough force to flank the engaged phalanx and quickly rout them.
Meanwhile, the remaining Roman right wing advanced up the hill and met the rest of Philips army as they were arriving in bunches. The flexibility of the maniples allowed them to surround and destroy each unit until the rest of Philip’s forces fled. This battle shows the ingenuity and freedoms allowed to Roman officers to enable them to make a battlefield decision that profoundly influenced the outcome.
The last great example of maniple and phalanx battle is found at the battle of Pydna during the third Macedonian war between Rome and Perseus. The decisive battle happened on flat ground not too far from the site of Thermopylae. The Macedonians outnumbered the Romans about 44,000 to 29,000 but both forces were equal in cavalry.
The two armies lined up, each splitting the cavalry on the wings and the Macedonian phalanx advanced. The Roman infantry met the phalanx and did not break, but were steadily forced back towards the broken ground behind them. As the long phalanx line pushed forward, they began to break formation as some areas pushed forward more than others and the uneven ground began to break the formation. 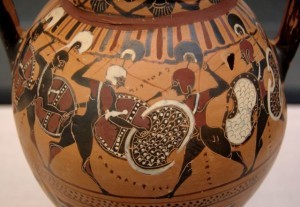 In small groups at first, the Romans dove into these narrow gaps in the lines and fought to widen them. As gaps grew, more, presumably fresh, men from the rear lines were fed through to completely infiltrate dozens of segments of the phalanx and the Macedonians soon broke. The cavalry fight was even but as soon as the infantry ran the cavalry followed suit.
This last battle shows the small unit tactics for which the maniple was built towards but also shows how well the maniple fit the Romans as a people. Romans were fiercely brave, and it took quite a feat of bravery to be among the first to jump into an enemy formation bristling with spears to open up gaps for your fellow soldiers.
The battles certainly showcase the manipular legion’s flexibility over the powerful but stiff Macedonian phalanx, but it would have been impossible with all the different variables to find a perfect battlefield matchup of the two formations. Each of the battles mention featured varying skill and experiences for the commanders and the armies in general.
The Macedonian phalanx continued to be used from Germany to Egypt and did prove to be effective. Even a minimally equipped and trained phalanx was still a forward moving force to be reckoned with.
The pliability of the Roman maniple allowed them to fight in any size group from whole legion advances to the individual soldier, ready for any occasion on the battlefield with two javelins, a large shield, and an effective gladius.