One day before the Hagia Sophia officially opens as an Islamic mosque, the governor of Constantinople (Istanbul), Ali Yerlikaya, made announcements regarding the praying schedule.

The main prayer is expected to begin at noon on Friday, July 24. According to information, the official service will start at 13:30, however, the doors of the UNESCO site will be open from 10 in the morning and will remain open until the next morning.

“We ask our citizens to bring 4 things with them when they come to Hagia Sophia. “Mask, prayer mat, patience and understanding,” Yerlikaya told Muslims who are expected to pack the Hagia Sophia tomorrow.

Yerlikaya expressed his gratitude to Turkish Recep Tayyip Erdogan who decided for the Hagia Sophia to be converted into a Muslim mosque after operating as a museum for 86 years. 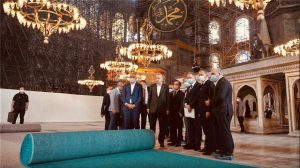 It should be noted that all those attending are obliged to carry invitations from Diyanet, the Supreme Religious Council.

The conversion of the former Christian Cathedral and UNESCO museum into an Islamic place of worship caused a global outcry, something that did nothing to deter Erdogan and his plans. 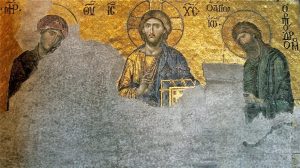 There will be 5 different areas in the building for the people to pray, segregated by sexes into 3 for men and 2 for women. Believers have been asked not to bring bags and backpacks.

The ceremony, which will be attended by Turkish President Tayyip Erdogan and the cabinet, will be led by the head of Turkey’s Religious Affairs Directorate, Ali Erbas.