Kim Jong-un’s date of birth remains one of the greatest mysteries to be solved for the whole world, although rumour has it the North Korean leader was born on 8 January, 1984.

Kim Jong-un is believed to be celebrating his 35th birthday today, although conflicting data from North Korean media suggest he was born in 1982, while South Korean intelligence officials think the actual date is a year late.

The US Treasury Department, in turn, has listed his date of birth as 8 January, 1984. Here are the most interesting facts (and rumours) about the North Korean leader on this very special occasion:

Kim Jong-un is a diehard basketball fan and a friend of former NBA star Dennis Rodman, who sang “Happy Birthday” to him five years ago to loud applause from spectators before leading a team of former American basketball players in a match against a North Korean team in Pyongyang.

Rodman has repeatedly visited North Korea and publicly professed affection for Kim, calling him “my friend for life”.

Kim’s style has been a subject of much discussion on media, with many paying considerable attention to his signature Mao-style suit, horn-rimmed glasses and, finally, his trademark high-cut hairdo. He has a sweptback hairstyle with the sides and back shaved, with media outlets claiming that the leader is afraid of barbers, and cuts his own hair. 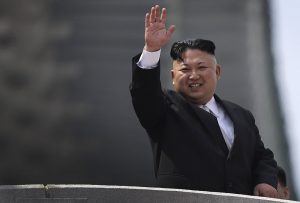 His hairdo was dubbed an “ambitious hairstyle” in North Korea, with many starting to emulate Kim’s iconic coiffure.

Following the historic meeting between Kim and his South Korean counterpart Moon Jae-in last May, South Korean journalists at Chosun Ilbo have examined the North Korean leader’s… footwear in order to learn his real height. 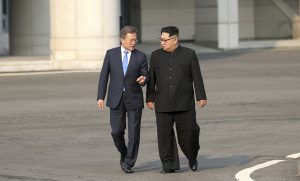 Kim, who was previously believed to be around 170 cm, appeared to be less than 2.5 cm shorter than Moon, whose height is estimated at 172 cm, but experts noticed that a high slope on the front of his shoes looked as if he was wearing height-increasing insoles, with one of them suggesting that Kim’s real height was only 162.5 cm.

Kim seems to be passionate about the menswear military trend, usually wearing dark or blue-gray button-up Mao-style suits, but once in a while he ditches the signature outfit… in favour of gray slacks, an oversized white T-shirt and a wide-brimmed straw hat.

I want to be as happy as Kim Jong Un is when he visits a fish pickling plant. #GoalSetting pic.twitter.com/hEGgDNmGuD

People have been taking selfies for a while now, but Kim had his first snapshot last June in Singapore, where he met with US President Donald Trump.

The North Korean leader was all smiles as Vivian Balakrishnan, Singapore’s minister for foreign affairs, took a selfie of them together on his mobile phone, which he then eagerly shared on social media.