The Soviet Union was not officially involved in the Korean War

During the Korean War (1950 to 1953) America and her allies sided with South Korea, while Russia and China sided with North Korea. Among their many weapons, the US had the North American F-86 Sabre (also called the Sabrejet), while North Korea used the Russian MIG-15. Both sides were therefore curious to know about the other’s planes. Which is why, the Soviets decided to steal a Sabre.

The US began using F-86s in 1949 as part of the 1st Fighter Wing’s 94th Fighter Squadron. Their swept-wing design allowed them to achieve transonic speeds (above the speed of sound at 600 t0 768 mph), leaving their straight-winged counterparts coughing in the dust.

As such, they quickly became the main air-to-air fighters used in the Korean War, though earlier models of straight-winged jets like the F-80 and F-84 were still used. This changed on 1 November 1950 when the Soviets responded to the Sabre with their own Mikoyan-Gurevich MiG-15 jet fighters.

The F-86 and the MiG-15 were similar in design, especially in their use of swept wings to achieve transonic speeds – but each had strengths and weaknesses.

Sabres could achieve speeds of 685 mph, as well as turn, roll, and dive faster. They were also more aerodynamically stable. Finally, they were equipped with AN/APG-30 radar gunsights. These allowed pilots to quickly aim their six 0.50-caliber machine guns more accurately, even compensating for speed.

MiGs could hit 670 mph, were better at climbing and acceleration rates, could fight at higher altitudes, and were far more maneuverable. Their aim, however, wasn’t anywhere near as good as a Sabre, but they more than made up for it with two 23-mm and a single 37-mm cannon.

Overall, however, the Sabre and the MiG were evenly matched. Most of their battles were fought over northwestern North Korea – a zone called Mig Alley. It stretched between North Korea and China, and spanned the Yalu River all the way to the Yellow Sea. 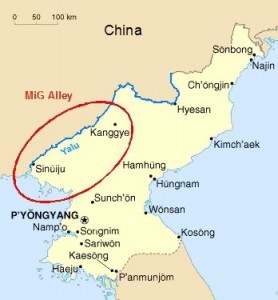 Although the MiGs were officially flown only by North Koreans, Soviet fighters actually did much of the flying, many of whom were WWII veterans. The Americans who flew the Sabres were also veterans of that conflict.

With their aerial superiority gone, the US launched Operation Moolah. They knew that neither the Chinese nor the North Koreans could have developed the MiGs, so the Soviets were obviously involved. With Soviet citizens risking their lives to defect to the West, it was hoped that some Soviet pilots would do the same.

To ensure that they did, secret agents in the Soviet Union created rumors that any pilot who defected with an MiG in tow would receive $100,000 and US citizenship. Little did they realise that the Soviets would beat them at their own game.

On 6 October 1951, 2nd Lieutenant Bill N. Garret’s patrol engaged the Soviet 324th Fighter Air Division – some of the highest scoring pilots in WWII. He was hit and ordered back to base while the rest of his patrol continued to fight. Neither side wanted to risk their jets falling into enemy hands, so Garrett obeyed.

On his way back, however, he encountered a patrol of four MiGs headed by Captain Konstantin Sheberstov. According to his interview in the Mir Aviatsii (a Russian aviation journal), Garret’s Sabre was trailing black smoke and making a controlled descent.

Shebertsov climbed to 3,300 feet, and when he closed in with the American at 975 to 1,150 feet, he fired his cannons. They hit the Sabre behind the cockpit, damaging its J-47 engine and also knocking out the pilot’s ejections seat.

Unable to fire back, Garret began evasive manoeuvres, but lost altitude while Shebertsov continued to tail him. The Soviet captain knew his government wanted a Sabre, so he was faced with a dilemma. 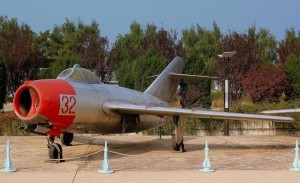 (A North Korean MiG-15 at the Chinese Aviation Museum in Beijing, China)

Soviets were not allowed to fly into UN-occupied territory, meaning into South Korea. They also couldn’t attack enemy planes up-close to avoid identification. The Soviet Union was not officially involved in the Korean War, after all, so their pilots wore North Korean uniforms. These rules were so strictly enforced that when a Soviet pilot jettisoned over the sea, his fellow pilots strafed him and his plane to avoid capture and identification.

So Shebertsov needed to bring Garret down before the American reached UN airspace, but neither could he destroy the Sabre if he could possibly avoid it. Garret’s slow descent was exactly what he needed, therefore. It would hopefully crash without too much damage.

The Sabre shot toward the coastline of the Yellow Sea, trying to make it as close to friendly territory, as possible. Garret also knew that the Soviets wanted his plane, so he was desperate to ditch it in the water.

He finally reached the coast, but failed to make it into the Yellow Sea. He had crashed into the beach when a rescue pilot found him and got him out; but the plane was another matter, entirely. It was stuck in the mud pools. North Koreans fired at him, so Garret and his rescuers fled.

In the skies, a battle raged as MiGs fought to claim their prize, while Sabres tried to fight them off. Then the tide started coming in. Hundreds of Chinese and North Koreans scrambled to disassemble the Sabre before the sea swallowed it completely, but they were constantly picked off by American planes and by US Navy ships sailing off the coast. 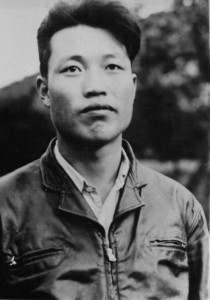 Despite losing seven MiGs, the Soviets got their prize and carted the pieces back to the Soviet Union in a convoy of trucks. They had to travel by night because the Americans had followed them into China, attacking the lead truck, which got away. With Soviet and Chinese pilots to harass the Americans, the pieces made their way back to Russia. Days later on October 24, they captured yet another Sabre.

Desperate, the Americans extended Operation Moolah into China and North Korea, broadcasting their offer on the radio and by dumping leaflets out of planes. It paid off. On 21 September 1952, Senior Lieutenant No Kum Sok defected to South Korea by landing his North Korean MiG-15 at the Kimpo Air Force Base.