His invitation was main news in all Turkish media

In an “unexpected” move Turkish President Tayyip Erdogan invited the Greeks of Constantinople (Istanbul) who had been expelled in 1955 to return to the city.

The gesture seems to be more of a public stunt to embellish the profile of the Turkish President, rather than a substantive intention and a policy meant to be implemented.

Turkish newspaper Sabah reported on the ‘invitation’ in a front-page piece, noting that Erdogan called on the ‘Romans’ – Rum, (Turks call Greeks Romioi) to return home.

According to the report, the Turkish president made this statement during the iftar dinner he held in honour of the religious leaders in Constantinople (Istanbul). As sigmalive.gr notes, almost all Turkish newspapers were reporting on the warm atmosphere during the iftar with the leaders of other religions in Turkey, pointing out that the Turkish leader “embraced” the minorities. 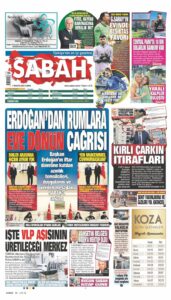 Turkish President Recep Tayyip Erdogan hosted an iftar dinner yesterday with Ecumenical Patriarch Bartholomew in Ankara, which was attended by other religious leaders.

The Ecumenical Patriarch, accompanied by the Metropolitan of Chalcedon Emmanuel, expressed his wishes to the Turkish President and to all Muslims for Ramadan and wished God to protect every human being and especially during this period of the pandemic, and to strengthen the competent state and local authorities, but also the health services, to deal with it and support our fellow human beings being tested. 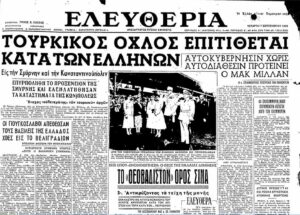 The once large Greek community of Constantinople has now shrunk to only a few thousand, as after the anti-Greek pogrom of September 1955 the ‘Romans’ were forced to flee their lands and property while many left in order to escape the worst.

The events of September 1955 mark the end of the 30-year-old political extermination of Hellenism in Asia Minor by the Turkish state.

The Treaty of Lausanne (1923) provided that the Greeks of Constantinople, Imbros and Tenedos were excluded from the population exchanges, as well as the Greek citizens of Western Thrace, Muslims in religion.