The most convincing photo to date!

Could it actually be true? An astonishingly clear photo surfaced showing what appears to be the Loch Ness Monster. A whisky warehouse worker has a picture of what could be one of the most convincing Loch Ness Monster sightings to date. Amateur photographer Ian Bremner, 58, was driving around the Highlands in search of red deer – but stumbled instead across the remarkable sight of what appears to be Nessie swimming in the calm waters of Loch Ness.
The father-of-four spends most of his weekends in the region taking photographs of the stunning natural beauty.
But it was not until he got back to his home in Nigg, Invergordon, that he noticed three humps emerging from the water which he thinks could be the elusive monster. The picture shows a two-yard long silver creature swimming away from the lens with its head bobbing away and a tail flapping a yard away, preparing to swim further on. The likely creature was spotted coming up for air close to the banks of the loch on Saturday afternoon midway between the villages of Dores and Inverfarigaig.
Ian said: “It’s a part of the world that always makes you second guess what you’re seeing.
“When you’re up there you’re constantly looking in the water to see if you can spot anything in there. “This is the first time I’ve ever seen Nessie in the loch. I would be amazing if I was the first one to find her.
“I’m normally a bit of a sceptic when it comes to Nessie and I think it’s just something for the tourists but I’m starting to think there is something out there.
“When I saw it on my screen I said, ‘what the hell is that?’
“If you’re fishing there it’s the sort of place where you can get a tingle up your spine and second guess what you’re seeing. The image he took closely resembles some of the clearest and most notable examples of the creature.
Encounters from 1933 tell of a 10ft long limbless creature crossing the road leaving behind a slimy trail of undergrowth. Mr Bremner said: “I suppose it could be seals – but I’m not so sure. The more I think about it, the more I think it could be Nessie.”
Over the years there have been 1,081 recorded sightings of the Loch Ness Monster lurking in the water. 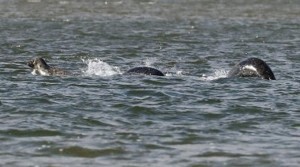