They claim to be saving lives, but they are colluding in a people-trafficking operation

Following the EU’s deal with Turkey over people smuggling, the issue of migrants trying to cross, and quite often drowning in, the Mediterranean has largely disappeared from the British media. There have been no more images like that of three-year-old Alan Kurdi, washed up on a Turkish beach after the rubber dinghy in which his family were trying to reach the Greek island of Kos capsized in August 2015.

Now, people smugglers and migrants know there is little point in trying to make the crossing from Turkey to Greece because they will only be sent back, in return for the EU taking refugees directly from camps in Turkey. The deal has successfully curtailed the activities of criminal gangs operating in the eastern Mediterranean: in the first six months of this year arrivals in Greece had fallen by 93 per cent compared with a year earlier.

But the problem hasn’t gone away; it has shifted westwards to Italy, where things just go from bad to worse. Last year a record 181,000 migrants arrived there by sea, nearly all from Libya, and this year there are sure to be many more: over 90,000 have so far been ferried across the Mediterranean from near the Libyan coast to Sicily, 300 miles away, according to the latest figures from IOM, the UN migration agency. Earlier this week IOM reported that 2,359 migrants have died trying to cross the Mediterranean already this year, on top of 5,083 deaths last year and 2,777 in 2015. 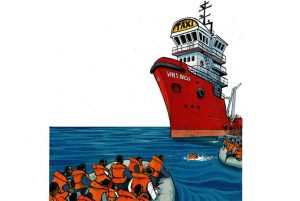 The EU, which has mismanaged the migrant problem from the start, only sealing the Turkey deal after years of inaction, has washed its hands of the latest explosion of migrant trafficking. It has ignored the Italian government’s increasingly desperate appeals for help.

Italy used to have a pressure valve. Most migrants used the country as a staging post to more prosperous countries in northern Europe. But with France and Austria reneging on the Schengen agreement by reintroducing border checks, they are stuck in Italy, a country with an unemployment rate of 12 per cent and an economy forecast to take another decade just to get back to the size it was in 2007. Worse, the migrant problem is concentrated in the south of Italy, where the economy is weakest and taxpayers most scarce. Many migrants are living in hostels, each at an annual cost of €13,000 to those Italians who do pay tax. Others disappear into the black economy, sleeping rough or living in illegally let and overcrowded flats.