He has been granted political asylum by Greece…

Self-proclaimed “anarchist refugee” from Iran, Abtin Parsa, who has been granted political asylum by Greece, published a call in a well-known anarchist website calling on the anarchist movement to arm illegal immigrants in Evros, stating that “the answer of bullet should be bullet back and this is the only way to open the border for all the immigrants”.

The call to all anarchists is written in the languages, Greek, English and Farsi which is spoken in both Iran and Afghanistan.

The long text is also hosted on major international anarchist sites accompanied by photographs of weapons. 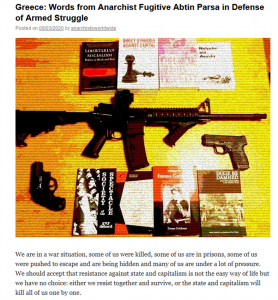 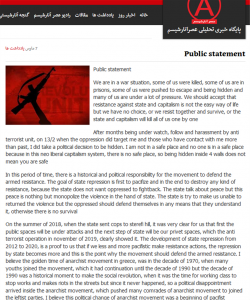 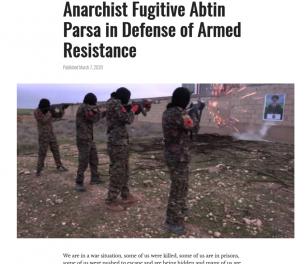 After months being under watch, follow and harassment by anti terrorist unit, on February 13, when the oppression did target me and those who have contact with me more than in the past, I did take a political decision to be hidden. I am not in a safe place and no one is in a safe place because in this neo liberal capitalism system, there is no safe place, so being hidden inside 4 walls does not mean you are safe.

In this period of time, there is a historical and political responsibility for the movement to defend the armed resistance. The goal of state repression is first to pacifize and in the end to destroy any kind of resistance, because the state does not want the oppressed to fight back. The state talks about peace but this peace is nothing but monopolizing the violence in the hand of state. The state is trying to make us unable to return the violence, but the oppressed should defend themselves by any means that they understand; otherwise there is no survival.

In the summer of 2018, when the state sent cops to Sterefi Hill, it was very clear for us that first, the public spaces will be under attack and the next step of the state will be our private spaces, which the anti terrorist operation in November of 2019, clearly showed. The development of state repression from 2012 to 2020 is a proof to us that if we are more pacifistic and make less resistance actions, the repression by the state becomes more and this is the point of why the movement should defend the armed resistance. I believe the golden time of the anarchist movement in Greece was in the decade of 1970, when many youths joined the movement, which had continuation until the decade of 1990, but the decade of 1990 was a historical moment to make the social revolution, when it was the time for the working class to stop work and makes riots in the streets, but since it never happened, a political disappointment arrived inside the anarchist movement, which pushed many comrades of the anarchist movement to joined the leftist parties. I believe this political change of the anarchist movement was a beginning of pacifist characteristic for the actions of the resistance movement. In 2008, simultaneous with the murder of Alexis G. by cops and in 2012, the economic crisis, the movement found more social bases to fight back violently against the state, but it was not like the social bases, which there were in the decade of 1990, so 2008 and 2012 could not became a social revolution.

Since a few days ago, thousands of immigrants are in the border of Greece/Turkey and try to get inside EU, but the cops and soldiers used war bullets and tear gas against immigrants. While I believe we should not get inside the political game of the states, right now, the most useful solidarity to the immigrants who are at the border is to arm them because the answer to bullets should be bullets back and this is the only way to open the border for all the immigrants. We as immigrants should fight for what we need and at the moment, our first need is survival, so we must destroy those who are killing us; we have nothing to lose but our fear.