New photos give us the best-ever look at NASA’s InSight lander on the surface of Mars and show the route the agency’s Curiosity rover is taking up a big Red Planet mountain.

The imagery comes courtesy of the HiRISE camera aboard NASA’s Mars Reconnaissance Orbiter (MRO), which has been circling the Red Planet since March 2006.

HiRISE has been studying Elysium Planitia — the equatorial site where InSight touched down in November 2018 — in an attempt to document changes in the landscape, such as dust devil trails, NASA officials said. And the camera managed to capture a great view of InSight during such work last month.

“Taken on Sept. 23, 2019, at an altitude of 169 miles (272 kilometers) above the surface, the new image is NASA’s best view yet of InSight from space,” NASA officials wrote today (Oct. 16) in a description of the newly released photo. “It clearly shows the two circular solar panels on either side of the lander body, spanning 20 feet (6 meters) from end to end.” 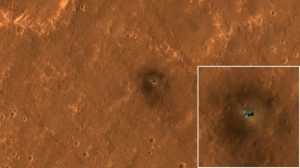 Much smaller details are visible as well. For example, the shiny object near InSight’s lower side is the cover for the lander’s seismometer suite, which shields the supersensitive instrument from the elements. This cover is so bright because it is dome-shaped and therefore reflects a lot of light, NASA officials said.