Frates played baseball for Boston College & became Director of Baseball Operations for the university in 2012; that same year he was diagnosed with ALS in 2012 at the age of 27

Pete Frates, the former college baseball star whose battle with ALS inspired the Ice Bucket Challenge, has passed away at the age of 34.

Frates, from Beverly, Massachusetts, was a symbol of hope for people with Amyotrophic lateral sclerosis (ALS) and raised awareness about the nervous system disease that weakens muscles and impacts movement. There is no cure for ALS.

The Frates family confirmed his death on Monday in a heartfelt statement. 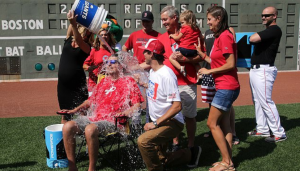 ‘Today Heaven received our angel: Peter Frates. A husband to Julie, a father to Lucy, a son to John and Nancy, a brother to Andrew and Jennifer, Pete passed away surrounded by his loving family, peacefully at age 34, after a heroic battle with ALS,’ the statement said.

‘A natural born leader and the ultimate teammate, Pete was a role model for all, especially young athletes, who looked up to him for his bravery and unwavering positive spirit in the face of adversity,’ it continued.