The Greek PM addressed a Greek-Chinese business forum in Shanghai

PM Kyriakos Mitsotakis called on Chinese business to trust Greece and invest in the country during a speech he delivered and a Greek-Chinese business forum held in Shanghai.

Addressing dozens of Chinese businessmen and 60 Greek entrepreneurs, Mr. Mitsotakis said the country had entered a new era.  “As Greece is in a phase of economic recovery, we are absolutely confident that we are heading for a new chapter in Greek-Chinese relations,” he said.

He went on to stress that “There is no better time to write a new chapter in Greek-Chinese relations. A new era is finally dawning upon Greece, after a very difficult decade.” 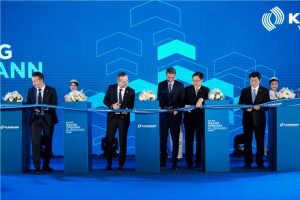 The prime minister directly called on Asian businessmen to show their trust in Greece, pointing out that it was the perfect time to do so.

“We are a government that is fully committed to implementing the necessary changes that will “unlock” the real potential of this country, while you are possess all those elements that can make Greece a real success story.”

Mr. Mitsotakis made reference to the negative borrowing rates Greece had a few days ago, which – as he pointed out – was unimaginable only a year ago.