The port city of Heraklion, capital of the Greek island of Crete, is facing serious problems, following torrential rainfall as the storm swept across the south of the Aegean Sea affecting the island.

The Fire Department Service is appealing to residents to avoid crossing the junction of Nea Alikarnassos, in Heraklion. The city airport is closed until 16.30!

Streets have flooded many streets, and according to the Fire Department services, the height of the rushing waters coming down near the bridge of the National (from the Police Headquarters) has reached at least 1 metre posing a serious risk to public safety. There were motorists reported trapped in vehicles, while things are also very difficult on the National Road. 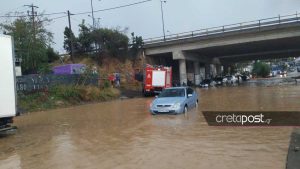 The entire motor network has suffered from the downpour and the flooding, leading authorities to instruct locals to avoid unnecessary movement. 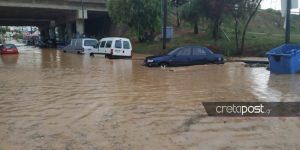 As the Heraklion Fire Department Director, George Tsikalas told the Athens News Agency the force of the storm was unprecedented while he called on citizens to remain in their houses for their safety. 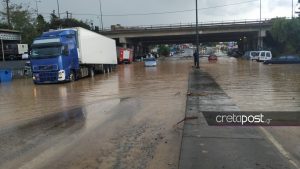 The Hellenic Civil Aviation Authority has inform passengers about the short-term suspension of the operation of Heraklion airport “N. Kazantzakis ”due to the severe weather that hit the island of Crete yesterday which caused problems in the infrastructure.\