A robot named Sophia in Saudi Arabia was granted citizenship this week, sparking a backlash that said the robot appeared to have more rights than millions of human women and foreigners living in the Gulf nation.
Sophia, a robot with human female features that can make facial expressions and hold conversations, wooed the crowd when it debuted at an economic summit in the country’s capital, Riyadh, this week.
As it stood on stage during a panel Wednesday, the robot learned from the moderator, CNBC’s Andrew Ross Sorkin, that Saudi Arabia had granted it what Sorkin called “the first Saudi citizenship for a robot.”
“I’m very honoured and proud for this unique distinction,” Sophia said, to applause. “This is historical to be the first robot in the world to be recognized with a citizenship.”
An arm of the Saudi Ministry of Culture and Information tweeted its support of the robot, made by Hanson Robotics and appearing as part of the Future Investment Initiative summit.
Soon after, though, social media users pointed out that Sophia had quickly achieved more rights than millions of women and foreign workers in Saudi Arabia, which has been criticized globally for repressing women’s and civil rights. 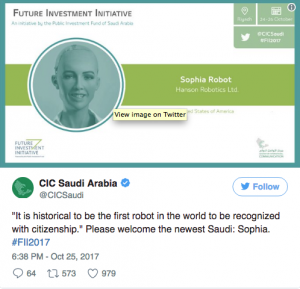 For one, Sophia appeared on stage alone, without the modest dress required of Saudi women; she donned no hijab, or headscarf, nor abaya, or cloak.
She also did not appear to have a male guardian, as required by Saudi law for women in the country. Male guardians, often a male relative, must give permission before women can travel abroad, open bank accounts or carry out a host of other tasks — and they accompany women in public.
Sophia also seems to have leapfrogged foreign workers in the Saudi kingdom, many of whom have fled poor working conditions but are prevented by law from leaving the country.