The United States Air Force (USAF) is understood to be developing a state-of-the-art hypersonic spy plane rumoured to be capable of flying at speeds of around 4,600mph.

But back in 2018, conspiracy theorist Tyler Glockner said he had stumbled upon the secretive craft after apparently trawling the swamplands of Florida on Google Earth.

According to Glockner, the runway that the mysterious object sits on is owned by aerospace company Pratt & Whitney who have a “foothold in designing aircraft engines”.

The object does look similar to the artist’s impression of the SR-72 plane, which is being developed by defence firm Lockheed Martin.

Yet it also looks suspiciously similar to a powerboat, which would be fitting for Palm Beach, Florida, the alleged location of the site. But, the conspiracy theorists might say, much less interesting.

The rumoured SR-72 is an upgrade on the SR-71 Blackbird that could reach beyond 2,000mph, which was retired in the 1990s and was used to spy on Vietnam, North Korea and the Soviet Union.

Paris mayor says she agrees with military chiefs who warned of the disintegration of France, as 18 of the officers are fired

Earlier this year, Brad Leland from Lockheed Martin said on the company’s website:

Hypersonic aircraft, coupled with hypersonic missiles, could penetrate denied airspace and strike at nearly any location across a continent in less than an hour.

Speed is the next aviation advancement to counter emerging threats in the next several decades.

The technology would be a game-changer in theatre, similar to how stealth is changing the battlespace today. 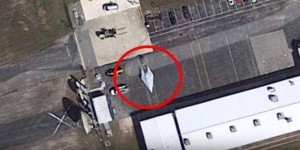