After taking back control of the House, Democrats will have President Trump in their crosshairs early next year. They will have the chance to initiate investigations into the president’s scandals or initiate the impeachment process. The chance of impeachment being successful is low considering that the Republican-controlled Senate will need a two-thirds majority to make it happen. A new Monmouth University poll has now found that the U.S. public would like Congress to keep Trump in check but that few Americans have the appetite for outright impeachment.

In July 2017, the same poll found that 41 percent of the public wanted the president removed from office. That has now fallen to 36 percent. Even though evaporating public support for impeachment is good news for President Trump, the poll also had some negative findings. Nearly 6 in 10 Americans want to see someone other than Trump elected to the White House in 2020. 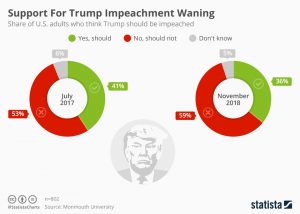