US cities are the safest

The Economist Intelligence Unit recently released its 2019 Safe Cities Index which ranked 60 major cities around the world across 57 indicators such as health security, infrastructure security, personal security and digital security. While American cities lagged behind in overall scoring, they actually did very well in the digital security pillar.

That pillar took into account factors such as controlling malware and levels of online surveillance. Even though Tokyo and Singapore had the highest scores, six of the top-10 cities were in the United States – Chicago, D.C., Los Angeles, San Francisco, Dallas and New York. Toronto and London were the two cities that rounded off the top-10. 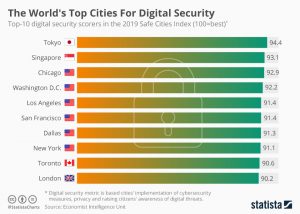