Myanmar citizens are the most charitable again

This year’s World Giving Index from the Charities Aid Foundation has revealed the countries in which the largest share of people have donated to charity in the last month.

As in previous years, Myanmar had the highest share of people most likely to donate to charity with 81 percent. It consistently tops studies about charitable giving, mainly because of the strong influence of Theravada Buddhists practising Sangha Dana where many people believe that doing good in this life improves their chances of their next life being a better one. 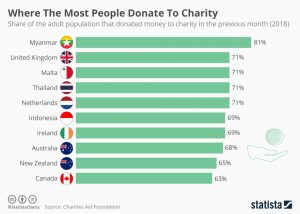