Greece will procure 1,200 of this type

Greece is expected to acquire the M1117 Guardian armored vehicles from the USA at a bargain price.

The “green light” for the acquisition of the first 4×4 M1117 Guardian armored type vehicles is expected to soon, resulting in an affordable and trustworthy deal.

In the summer the US Congress approved the sale of 1,200 used armored vehicles in excellent condition for about 70,000 euros each at a time when their real value was estimated at at least 500,000 euros each!

The above price includes the vehicle without weapons but with the turrets. The advantages of these vehicles include the fact that they are in excellent condition and in operation while their repair costs are extremely low as spare parts are low prices and can be found on the market. 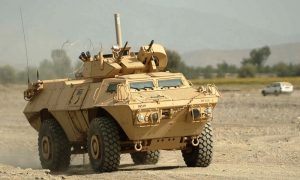 The M1117 Guardian armored security vehicle is a further development of the Cadillac Gage Commando armored personnel carrier. It is used by the US Military Police. The first M1117 vehicle entered service in 1998, however, production was slow and the program was nearly canceled. However, the war in Iraq gave a new life for the vehicle.

The M1117 has a modular expandable armor system. Front arc provides protection against 12.7 mm armor-piercing rounds. In certain cases, the vehicle can withstand mine blasts. The Guardian has an air filtration system to protect against chemical and biological attacks, however, it can’t protect against nuclear weapons. During the US military operations in Iraq and Afghanistan, the M1117 Guardian replaced in some roles the venerable HMMWV light utility vehicles.

This armored security vehicle is armed with a 40 mm automatic grenade launcher, 12.7 mm, and 7.62 mm machine guns. Weapons are mounted in a turret similar to that used on the Amphibious Assault Vehicle and are operated under armor. 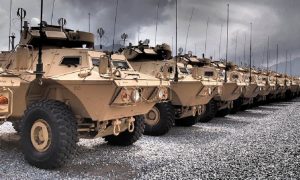 The vehicle can carry a crew of three soldiers who enter and exit the vehicle via doors or roof hatches.

The M1117 Guardian is powered by the Cummins 6CTA8.3 diesel engine, getting up to 260 horsepower. The engine is located at the rear. The vehicle has run-flat tires and is fitted with a central tire inflation system. A self-recovery winch is fitted at the front. The Guardian is not amphibious.