Hundreds of police officers are hunting a gunman after three people were killed and 12 others wounded in a shooting in the eastern French city of Strasbourg.
The suspect, who is known to security services, and is reportedly named Cherif Chekatt, a French citizen of Moroccan descent, escaped after exchanging fire with soldiers and armed police on Tuesday. He is believed to be injured.
The shooting happened close to a popular Christmas market near one of the central squares, Place Kléber.
France’s counterterrorism prosecutor has opened an investigation.
However, the motive for the incident remains unclear. 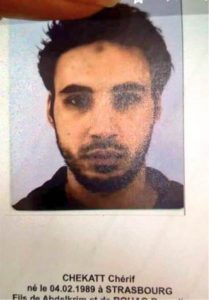 “He fought twice with our security forces,” French Interior Minister Christophe Castaner said.
Confirming that three people had died, Mr Castaner said that border controls had been strengthened and security at all Christmas markets would be stepped up, with 350 security agents hunting for the gunman.
He added that France had raised its security alert level to “emergency attack”.
Six of those reportedly injured on Tuesday were said to be in a serious condition, while six others suffered light injuries, police said.
Police added that the 29-year-old suspect was born in Strasbourg and was already known to the security services as a possible terrorist threat.