Greek authorities have closed down beach

Two of the 7 people injured yesterday at the famous Navagio Beach in Zakynthos after the collapse of rocks spoke to local media outlet imerazante.gr explaining their terrifying experience. Fortunately, all the injured only suffered minor problems. Australian-Cypriot Charalambos Evripides said he saw rocks falling from the cliff as he was returning to his boat about 20 metres from where his boat was anchored. “Before we could realise what was going on more rocks collapsed creating a wave that capsized our boat. We fell into the water, while we saw a family of 4 Czechs next to us with the woman covered in blood calling for help. We collected them we all went to Vromi port”. 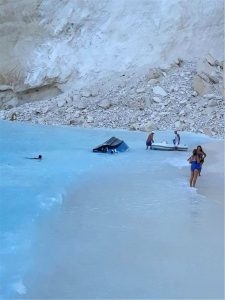 The captain of a vessel that transports tourists to the beach said he saw images of a “biblical disaster”. “There were pieces of rock falling in three stages, with most of them causing large waves, resulting in two boats being overturned and injuring tourists. We saw a family in the sea and we picked them up and offered them first aid before taking them to the hospital”, Spyros Kandilas said.

Greek authorities have decided to block access to the beach for tourists until an investigation on its safety is completed.

From now on tourist will only be able to admire the beautiful beach from a distance, following the decision by head of the Zakynthos Port Authorities, Nikolaos Kokkalas to ban boats from anchoring near the shores.