A late-night tweet by U.S. President Trump suggesting that China has agreed to ease tariffs on American-made cars shipped to China has sent the share prices of several carmakers soaring. While Ford and Fiat Chrysler were both up more than 2 percent in pre-market trading on Monday, German automakers BMW and Daimler were up more than 5 percent halfway through Monday’s trading session in Germany.

In case you’re wondering what German carmakers stand to gain from a potential trade truce between the United States and China, the following chart has the answer. Both BMW and Daimler (Mercedes-Benz) operate plants in the United States, where they predominantly build SUVs and other luxury models, of which many are exported to China. In fact, according to LMC Automotive, 7 of the 10 American-made models most exported to China in 2017 were BMW/Mercedes models.

With more than 100,000 vehicles shipped to China last year, BMW was not only the company exporting the most cars from the U.S. to China, but its Spartanburg plant was the largest U.S. automotive exporter in total with more than 270,000 exported BMW X models and a total production volume of 371,284 in 2017. 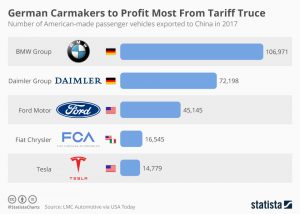