Her cheering dad seems to approve!…

A twerking teenage girl has sparked controversy on a TV talent show after she performed a raunchy routine in front of her cheering father.

Sara Seifert, 18, from Vukovar, Croatia, shocked judges and viewers with her performance on the country’s Super Talent show, the Croatian version of Britain’s Got Talent. 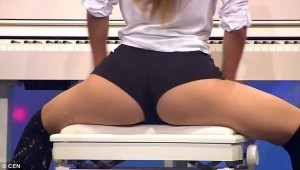 A clip of the show shows her walking on stage wearing a blonde wig and a black dinner jacket before sitting down at a white piano as if to play a piece of classical music.

But as she sits down Miss Seifert whips off her jacket to reveal a pair of black hotpants, as piano music begins to play.

As the camera focuses on the teenager’s bum, she begins to twitch her buttocks in time to the music as the judges look on open-mouthed. 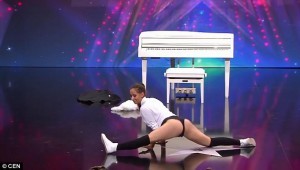 Keeping her back to the audience, the teenager leaps to her feet and launches into a raunchy dance performance.

Twerking throughout, at one point on her knees, the judges looked stunned with one female member of the panel putting her hands on her head and fanning a male colleague with a piece of paper as if to cool him down. 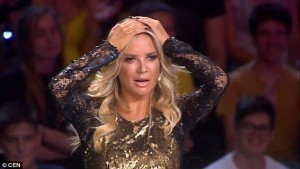 However the teenager said that she did not see anything controversial in her father’s actions as her parents always supported her in whatever she did.

Miss Seifert said she had expected a reaction to her routine but had been taken aback by the amount of criticism she and her father had received.

‘Twerking is not easy,’ she said. ‘I never had any previous experience in dancing before. People should appreciate my efforts.’ 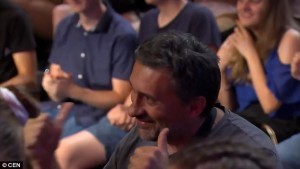 She added that she had learnt to twerk by watching videos on YouTube and had been practising six days a week for four years to perfect her moves.

Miss Seifert says she intends to carry on twerking and revealed that she wanted to move to Ireland as her brother was living in Dublin.