Properties have been severely damaged and lives were threatened

The fire brigade in Thessaloniki had received more than 300 calls for assistance by Thursday afternoon, following a heavy thunderstorm accompanied by hail that broke out in the northern Greek city at around 12:30.

According to reliable sources, a woman swept away by a torrent at Sykies has been rescued, while efforts are continuing to rescue four people trapped on a bridge after their vehicles were immobilized due to the high water level. 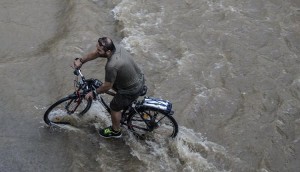 Many ground-floor and basement shops and houses were flooded during the downpour, which turned roads into rivers and flooded the city’s landmark White Tower on the seafront, as well as the basements of the Thessaloniki City Hall.

The city also experienced power cuts due to the thunderstorm, while lightning falling on the city’s Macedonia international airport caused airport authorities to stop the refueling of planes as a safety precaution for seven minutes. The airport has now resumed normal functioning, Fraport Greece spokesman Yiannis Papazoglou told the Athens-Macedonian News Agency.

A total of 24 pupils from the school of Pelion were trapped for two and a half hours in the city’s trademark building, the White Tower. The heavy rainfall that hit the city created a ditch at the entrance of the tower, trapping them inside.

With them were nine English tourists along with their guide. Altogether, eighty people -pupils, tourists and workers- were trapped in the White Tower because of the downpour. 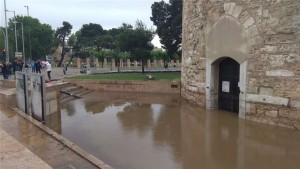 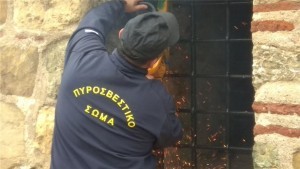 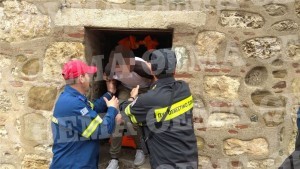