Qassem Soleimani, head of Iran’s elite Quds Force, killed in an airstrike as tensions between US & Iran escalate

Tensions between the United States and Iran escalated on Friday after a US airstrike killed Qassem Soleimani, the head of Iran’s elite Quds Force, and Abu Mahdi al-Muhandis, the deputy commander of Iran-backed militias known as the Popular Mobilization Forces, or PMF.

The Pentagon confirmed the strike, saying it came “at the direction of the president”.

Soleimani and al-Muhandis’s deaths are a potential turning point in the Middle East and are expected to draw severe retaliation from Iran and the forces it backs in the region against Israel and US interests. 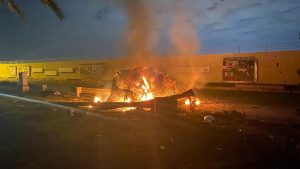 The United States is urging US citizens to leave Iraq “immediately”, citing “heightened tensions in Iraq and the region”.

A State Department statement added that “due to Iranian-backed militia attacks at the US Embassy compound, all consular operations are suspended. US citizens should not approach the Embassy.”

That comes after a crowd attempted to storm the embassy in Baghdad earlier this week to protest US airstrikes against a militia supported by Iran.

Israel’s military had gone on heightened alert amid fears that Iran could strike through its regional allies such as Hezbollah to the north, or through Palestinian group Hamas and Islamic Jihad in Gaza.

Israel’s defence minister summoned the country’s military and security chiefs to Tel Aviv in the wake of the killing. Meanwhile, Prime Minister Benjamin Netanyahu has reportedly cut short his trip to Greece. 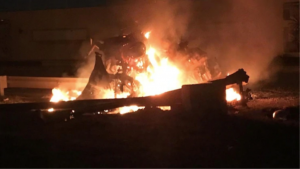 Soleimani acquired celebrity status at home and abroad as the leader of the foreign arm of Iran’s elite forces Islamic Revolutionary Guard Corps (IRGC) and for his key role in fighting in Syria and Iraq.

He survived several assassination attempts against him by Western, Israeli and Arab agencies over the past 20 years.