He is definitely one of the most recognisable sports figures globally. The media adores Zlatan Ibrahimovic for his footballing skills and his unique personality, and the Milan forward from Sweden love his supercars.

The towering 195cm player was recently seen whizzing around in his new all-black Ferrari Monza SP2 in downtown Stockholm. Zlatan Ibrahimovic is a fan of supercars, having a remarkable collection that includes, among others, the Porsche 918 Spyder and Ferrari Enzo. 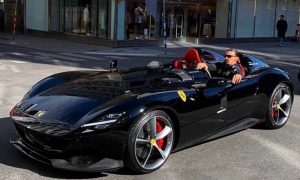 According to reports, Ibrahimovic had the beautiful Monza SP2 during the “lockdown”, while the colour of the body was  custom requested. The two-seater Ferrari Monza SP2, like the SP1 car, follows the retro lines of previous decades, especially the 50’s, with the legendary 166 MM Barchetta of 1949, as well as the 750 Monza and 860 Monza, two models set Ferrari as a racing car legend. The Virtual Wind Shield replaced the classic windshield, which diverts the flow of air around the driver, thanks to the fairing in front of the steering wheel. 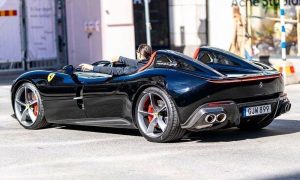 A YouTuber with a channel named Stockholm Carspotting recorded the 38-year-old sports celebrity as he was making a right turn in the centre of the city. As he wrote in the description, “I didn’t even realise who was driving the car until I looked at the footage. I was too preoccupied with marvelling at the car.”