Greece was a major buyer

Germany produces a main battle tank (MBT) that is pretty popular with foreign armies. The Leopard 2 was designed in the late 1970s and has since been updated and modified various times. Since 1992, Germany has granted exports for more than 1,900 of the armoured heavy-weights, many of which were sold to NATO partner Turkey (347 since 2006). Greece and Turkey have been major buyers of the tank for some time.

Those same tanks are now being used against Kurdish militias in Northern Syria, which Turkey considers to be terrorists, who are nevertheless supported by the United States in their fight against the Islamic State. 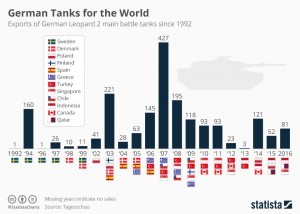