Cyber Monday swept across the world, with most countries participating in the global e-commerce extravaganza, which has taken off in recent years. According to information from Statista’s Digital Market Outlook, there are 259 million e-commerce users in the United States. For all the revenue e-commerce generates, each user brings in around $1,952.

The largest market for e-commerce is China with roughly 1 billion e-commerce shoppers. The United States comes in a distant second, despite the bigger bang the country brings in for revenue per user. 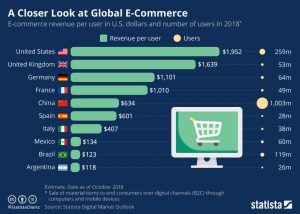