A new era in transportation?

A pilotless passenger-carrying drone will begin flying over Dubai from this summer.
The arrival of the Ehang 184, was announced by the head of Dubai’s Roads and Transportation Agency Mattar al-Tayer at the World Government Summit.
It will be the first time the electric vehicle, which launched at CES in 2016, has been in regular use anywhere in the world.
It can carry one passenger weighing up to 100 kilograms and can stay airborne for 30 minutes on one charge. Once inside, the passenger uses a touchscreen to select a destination, and the drone is then “auto-piloted” by a command centre.

There is no passenger override function, which means that anyone can travel in the drone without a pilot’s license and there is no fear of the drone being hijacked. This also means, however, that the passanger can’t take control in an emergency. 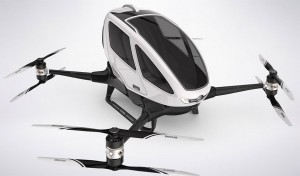 The drone can fly safely even if one of the propeller mulfanctions. In the event of a malfunction the drone will immediately land in the nearest available area, a safety feature the company calls “Ehangen fail-safe system”.