This proves Neanderthals had started pillaging the ocean for resources long before Homo sapiens took over, scientists claim

Neanderthals are often viewed as brutish, plodding beasts that were driven to extinction by the superior intellect of Homo sapiens.

But new evidence shows an elegant streak to our early cousins, as a study reveals they sought out materials for tools from the seafloor, up to 13 feet underwater.

Scientists found 171 shells dating back 100,000 years at an Italian cave and proved almost a quarter of them were lying on the seabed when they were plucked by a diving Neanderthal.

The rest of the clamshells — three-quarters of them — are thought to have washed up on the beach naturally during the Middle Palaeolithic period. 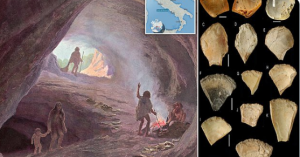 Many of these shells, together with volcanic rock from the Mediterranean sea and shore, were fashioned into tools such as scrapers, the study found.

The scientists from the University of Colorado at Boulder say this proves Neanderthals had started pillaging the ocean for resources long before Homo sapiens took over.

The findings come from discoveries made in Grotta dei Moscerini, a cave that sits ten feet above a beach in what is today the Latium region of central Italy.

Neanderthals dived for clams and swam up to 13 feet underwater off the Italian coast 100,000 years ago
via https://t.co/tFsNEMpxzq https://t.co/CcqpyQOFAn