The foal autopsy should reveal a lot about Pleistocene Siberia

This is the second time that a defrosted Ice Age animal has turned out to contain liquid blood, said Semyon Grigoriev, the head of the Mammoth Museum at North-Eastern Federal University in Yakutsk. In 2018, Grigoriev and his colleagues extracted liquid blood from a 32,200-year-old mammoth carcass. That makes the foal’s blood the oldest ever found by 10,000 years. 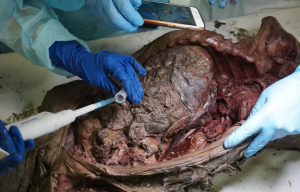 Grigoriev and his colleagues are set on cloning a mammoth and other Pleistocene fauna, and they’re already trying to clone the foal, a member of an extinct species called the Lena horse. It’s a long shot, though, Grigoriev wrote in an email to Live Science.