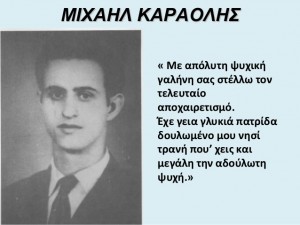 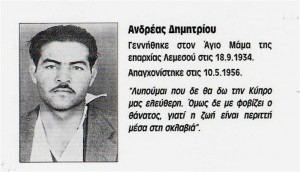 On August 28, 1955, along with Andreas Panagiotou, they killed the police officer Herodotus Poulis as he infiltrated a rally of AKEL. Panayotou fled while Karaolis was arrested by the English forces and was imprisoned in the Nicosia Central Prison. On 28 October, he was sentenced to death, although the bullet that killed the Greek-Cypriot policeman came from the Panagiotou’s weapon. The English did not forgive that during the interrogation he did not reveal his comrades. 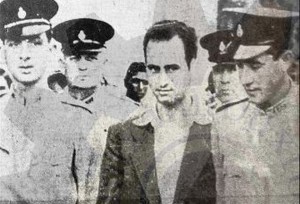 Andreas Dimitriou was born on 18 September 1934 in Agios Mamas Limassol. He spent three years at Famagusta night school and then got a job at a shop of explosives and hunting gear. Since a young man, he had been involved in trade unionism and had been a secretary of the Porters’ Union. As a young EOKA fighter, he was among the first that stole weapons from the Famagusta occupation authorities. The weapons were given to several EOKA groups, which until then had been equipped with hunting rifles. On November 22, 1955, he was accused of shooting and injuring in Famagusta the Intelligence Service agent Sidney Taylor. He was arrested and sentenced to death. 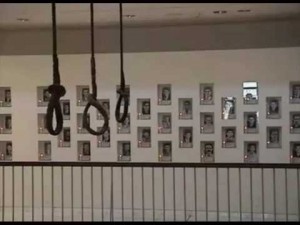 On 10 May 1956, Michalakis Karaolis and Andreas Dimitriou were hanged in Nicosia’s Central Prisons. Their brave stance before their authorities and the fact of their killing provoked a global reaction and outrage. The previous day (May 9, 1956) in Athens, four people were killed by the clashes between police and protesters calling for the Unification of Cyprus with Greece. To honor the two heroes, many roads in Greece and Cyprus bear their name.