But they are close to being extinct

The Ili pika, a tiny mammal found on the high-elevation cliff faces of the Tian Shan mountains in northwestern China, has been captured on film for the very first time.

First discovered by Xinjiang Institute for Ecology and Geography scientist Weidong Li in 1983 and confirmed to be a new species in 1985, the elusive plant-eating mammal was not spotted again until nearly 20 years later, despite several field missions dedicated solely to tracking one down.

In 2014, a gorgeous photo was taken by Li finally reacquainted the world with the charismatic pika (Ochotona iliensis). After decades of strenuous searching, one of the 20-centimeter-long (8-inch), 0.2-kilogram (0.5-pound) creatures serendipitously ran across his boot as he scoured the barren landscape, and then sat motionless on a rock wall just long enough for a high-quality portrait to be snapped.

According to National Geographic, it was on that same trip to the mountain range that Li’s team began placing motion-activated cameras in the stone crevices that – thanks to observations of droppings and food caches – pikas are known to frequent.

“The thing is, if you see one animal in 20 years, you’re not going to be able to accurately portray what’s going on,” Smith told National Geographic. 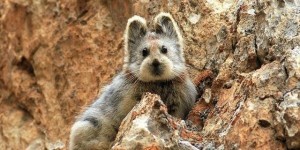 Based on fieldwork throughout the 1990s and early 2000s, a 2005 report by Smith and Li estimated that the total Ili pika population was around 2,000 individuals. O. iliensis was listed as endangered in 2008, yet despite the added protections, the scientists concluded that the pikas were no longer found across 57 percent of their previous range by 2015. At the time, they speculated that only 1,000 or fewer pikas remained.

Like many mountain-dwelling organisms, this species is threatened by climate change. Originally found at altitudes between 2,700 and 3,350 meters (9,000-11,000 feet), over the past 30 years, evidence of Ili pika inhabitation has been found as high as 3,960 meters (13,000 feet), suggesting that warming temperatures are driving the animals higher and higher up the slopes in order to find the chilly habitat they evolved to thrive in.

Eventually, they will top out, and with nowhere to go, simply go extinct.