Animals were important spiritual conduits communicating between humans and their gods

Scans of a 2,000-year-old crocodile suggest the reptile was hunted for mummification rites.

Mummified animals have been recovered from many, if not most, ancient Egyptian tombs and while today we love cuddling up to our pets, few of us regard them as divine. Back then, animals were important spiritual conduits communicating between humans and their gods and each one was symbolic of or associated with a different deity. 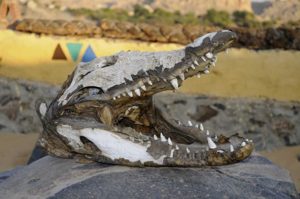 Now, a new paper published in the Journal of Archaeological Sciences by a team of researchers led by Stéphanie M. Porcier of France’s Université Paul-Valéry Montpellier III suggests crocodiles were actively “hunted for mummification”.

One crocodile specimen was discovered by archaeologists excavating the Upper Egyptian city of Kom Ombo during the early 20th century and now, using a technique called synchrotron scanning, the paper determines that the reptile was “sneaked up on” and smashed on the head, fracturing its skull.