The company behind one of the most successful perfumes in Europe, the Greek-owned Sarantis Group has found everything their fragrance embodies in the face of the Bucks star.

Sarantis Group is one of the leading fast-moving consumer goods companies in Europe and has a very strong international presence, operating subsidiaries in 12 European countries through an extensive distribution network and exporting to more than 40 countries worldwide.

With Giannis as its face, the campaign has been rolled out to more than a dozen countries gaining millions of impressions and sales for both the NBA star and the Greek fragrance respectively. 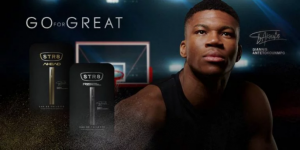 The new STR8 Antetokounmpo Collection includes two scents, ‘Rise’ and ‘Ahead’ scents, which as Giannis explains represent who he is on and off the basketball court.

The idea behind the Antetokounmpo Collection is that every spray enhances a young man to “go and get” what they want in life without any fear or hesitation, in order to experience the great feeling of success, just like he did.

From humble beginnings, but rising to stardom thanks to his immense passion and determination; the two STR8 fragrances represent the subtle and strong sides of the ‘Greek Freak’ phenom.

The Philippines is the first market outside of Europe to launch the new Fragrance Collection under Antetokounmpo’s signature.