Efforts to enter the mysterious tomb atop Kasta hill at ancient Amphipolis began early on Monday morning with baited breath and great expectations. Architect Michalis Lefantzis arrived at the site early in order to participate in the efforts headed by lead archaeologist Katerina Peristeri, who is directing the excavation.

Work had been suspended because of the long weekend celebrating Dormition day (August 15), a public holiday in Greece. The large site, that includes a recently-discovered monumental wall protecting a tomb dated circa 4th century B.C., has been closed to the public and has been under police guard. 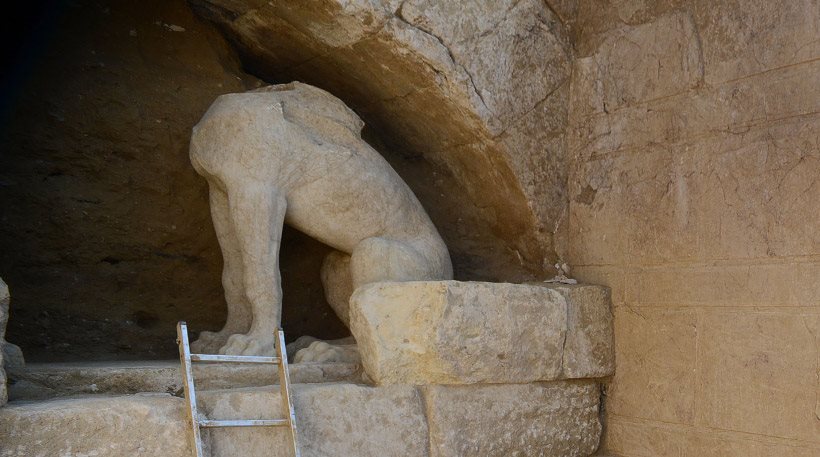 The ancient sphinxes unearthed at the aancient site were recently covered in a coat of plastic to protect them from weather conditions and prying eyes. These two carved sphinxes were found after a 4.5-meter-wide road and 13 steps to the tomb, and were placed to guard the entrance. Now, the archaeologists need to destroy the stone wall constructed to protect the tomb. They are expected to remove volumes of debris around the archaeological finds. Sources state that high technology has yet to be utilized at the site.

The best case scenario would be for the roof not to cave in and for all treasures to be intact and not have been looted so that researchers can identify the person buried here based on bones, gender and other indications. The burial chest and objects connected to the buried person’s life – such as jewelry, pottery, weapons etc. – would also be in the tomb, provided it hasn’t been robbed. The site is close to the nearby city of Amphipolis that was once rich due to its gold reserves so the artefacts inside may be magnificent finds. Furthermore, if it is the burial site of one of Alexander’s comrades, then it will also have great treasures brought back from the East. Archaeologists point out that generals and admirals who returned to Macedonia from Alexander the Great’s campaign to the East in 320 B.C. were financially capable to build such a construction.

Lefantzis’ kept his lips firmly shut and said that any official announcement regarding developments at the site will be made by the Ministry of Culture and Sport. He quelled rumors that the revelations were programmed to coincide with the opening of the Thessaloniki International Trade Fair on September 6.

The discovery attracted an increase in tourists to the nearby area, with most visitors heading to the Amphipolis Museum. High school students of Amphipolis have been included in the developments and met with Lefantzis as part of a good-will gesture. Earlier, the students had taken part in two nights of historical narration about Amphipolis in the 2300 B.C.

The findings have attracted local as well as international interest as news about the discovery made the round of the world. Over the next few days, a BBC crew with full technical equipment will be installed outside the archaeological site in order to transmit all the developments at the excavation. 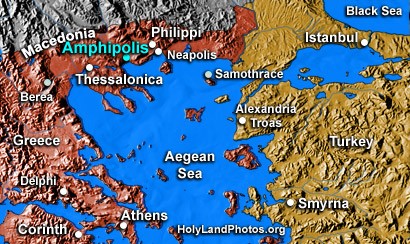