The remains of a baby bird from the time of the dinosaurs have been discovered in a specimen of 99-million-year-old amber, according to scientists writing in the journal Gondwana Research.

The hatchling belonged to a major group of birds known as enantiornithes, which went extinct along with dinosaurs at the end of the Cretaceous period, about 65 million years ago. Funded in part by the National Geographic Society’s Expeditions Council, this discovery is providing critical new information about these ancient, toothed birds and how they differed from modern birds. 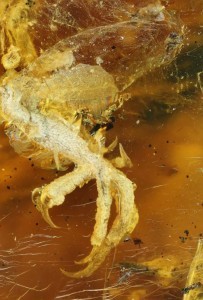 This is also the most complete fossil yet to be discovered in Burmese amber. Mined in the Hukawng Valley in northern Myanmar, Burmese amber deposits contain possibly the largest variety of animal and plant life from the Cretaceous period, which lasted from 145.5 to 65.5 million years ago.

Based on its molting pattern, researchers could determine that the bird was only in its first days or weeks of life when it was enveloped in sticky tree resin and literally frozen in time. Nearly half of the body is preserved in the three-inch sample, including its head, wings, skin, feathers and a clawed foot clearly visible to the naked eye. Its 99-million-year-old feathers range from white and brown to dark grey in color, and the researchers have nicknamed the young enantiornithine ‘Belone’, after a Burmese name for the amber-hued Oriental skylark. 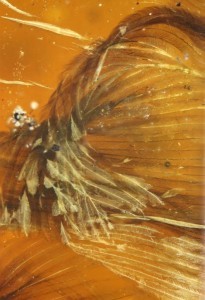 The find was reported by several of the same researchers who discovered a feathered theropod dinosaur tail preserved in amber last December. The structure of the dinosaur feathers suggested that it would be incapable of flight. On the other hand, an earlier find of enantiornithine wings in amber revealed a feather structure remarkably similar to flight feathers of modern birds.

In this specimen, scientists observed that while the baby enantiornithine already possessed a full set of flight feathers on its wings, the rest of the plumage was sparse and more similar to the theropod dinosaur feathers, which lack a well-defined central shaft, or rachis.

The presence of flight feathers on such a young bird is reinforcing the idea that enantiornithes hatched with the ability to fly, making them less dependent on parental care than most modern birds.

This independence came at a cost, however. The researchers point out that a slow growth rate made these ancient birds more vulnerable for a longer amount of time, as evidenced by the high number of juvenile enantiornithes found in the fossil record. (No juvenile fossil remains from any other bird lineage are known from the Cretaceous). 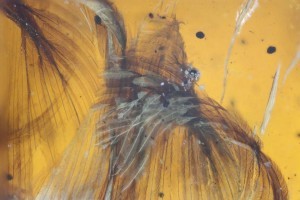 The fossilized specimen was purchased in Myanmar in 2014 by Guang Chen, director of the Hupoge Amber Museum in Tengchong City, China, after he had heard about an amber sample with a strange “lizard claw” inclusion. Chen brought the sample to research team co-leader Lida Xing of the China University of Geosciences, who identified the claw as an enantiornithine foot. Additional imaging of the specimen revealed the remarkable extent of preservation obscured behind thick layers of amber, carbonized plant remains, and clay-filled bubbles. 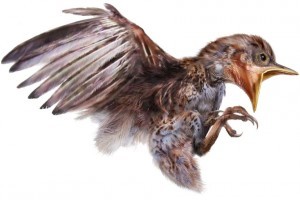 “[I thought we had] just a pair of feet and some feathers before it underwent CT imaging. It was a big, big, big surprise after that,” says Xing.

“The surprise continued when we started examining the distribution of feathers and and realized that there were translucent sheets of skin that connected many of the body regions appearing in the CT scan data,” adds team co-leader Ryan McKellar of the Royal Saskatchewan Museum. 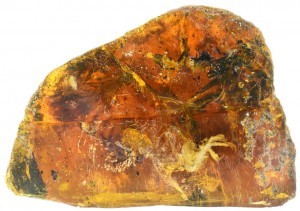 ‘Belone’ is currently on display at the Hupoge Amber Museum and will travel to the Shanghai Museum of Natural History for a special exhibit between June 24th and the end of July 2017.