The National Bureau of Statistics of China released more data pointing towards weakness in the world’s second-largest economy. In the second quarter of 2019, the country’s gross domestic product (GDP) grew by 6.2 percent, a decline in the 6.4 percent recorded in the first quarter. While that sounds great from a U.S. or European perspective, different standards apply to the previously booming Chinese economy, where 6.2 percent is the lowest growth rate for 27 years.

Lackluster domestic demand paired with the cooling effects of the trade war with the United States on exports contributed to the slowdown, continuing a downward trend that has been going on for several years now (with 2017 a surprise exception). At the start of the year, the Chinese government announced a 1.3 trillion yuan ($193 billion) stimulus package to bolster the economy, one of several measures recently taken to prevent the country’s growth from collapsing altogether. China’s economy is closely watched internationally, as many international corporations consider it a key market in reaching their own growth targets. 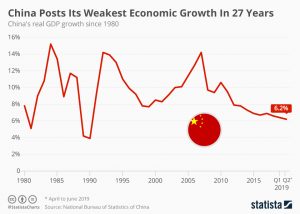