Both programs cost billions of dollars, but were they money well spent?

The U.S. Air Force’s original plan was for the F-22 to be its high-end air superiority fighter while the F-35 was designed to be primarily an air-to-ground strike aircraft, but one which could defend itself.

Lockheed Martin’s F-35 Joint Strike Fighter—which is built in three versions—recently completed its developmental test phase and is operational with the U.S. Air Force and Marine Corps. Meanwhile, the U.S. Navy will soon join the ranks of JSF operators with the F-35C carrier variant, which is scheduled to become operational later this year or early 2019.

The Navy—which refused to accept anything other than the final Block 3F configuration—is the last of the three services to adopt the aircraft, which the Marines adopted first in 2015 with the F-35B jump-jet variant. Meanwhile, for the Air Force, the F-35A conventional takeoff version is rapidly becoming its mainstay fighter. Indeed, with the production of the Lockheed Martin F-22 Raptor having been terminated at 187 aircraft and the Air Force seriously considering the retiring its Boeing F-15C Eagle fleet, the JSF might be pressed into the air superiority role. But how does the F-35 stack up against the F-22 as a fighter?

The answer is that the F-35 cannot match the F-22 as an air superiority fighter—it was never designed as such. The U.S. Air Force’s original plan was for the F-22 to be its high-end air superiority fighter while the F-35 was designed to be primarily an air-to-ground strike aircraft, but one which could defend itself. Thus, while the Raptor was designed with a very high degree of stealth, exceptional kinematic performance and extreme maneuverability, the JSF was designed to be stealthy, networked and have exceptional sensors, but with aerodynamic performance only comparable to an F-16 Fighting Falcon or F/A-18 Hornet. Thus, the aircraft are designed to be complementary to each other. 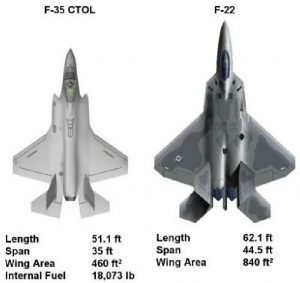 However, the Air Force did not get its way. Former U.S. Defense Secretaries Donald Rumsfeld and Robert Gates—neither of whom foresaw the rise of great power challengers to the United States—discounted the need for air superiority, and as a result, truncated the F-22 buy at 187 aircraft. That is less than half the fleet sized the Air Force’s analysis and stated requirements called for. Indeed, most studies at the time showed that a minimum of 381 Raptors were needed to ensure American air superiority.

With only 187 aircraft produced, the Air Force had to adapt. The service cut down on the number of primary authorized aircraft per squadron and skimped on the backup aircraft inventory, training and test plane fleets. Instead of having 10 squadrons of 24 aircraft plus two backup jets, the Air Force has 21 aircraft plus two backup jets in six operational squadrons while test and training assets have been cut to the bone. In fact, the Air Force’s elite Weapons School and its operational test units at Nellis Air Force Base in Nevada have to share about a dozen F-22s between them because there are not enough planes to equip those critical units.