“It had no plumes, wings or rotors and outran our F/A-18s”

The Navy has updated its guidelines for pilots to report unidentified flying objects, the New York Times reported, following a series of mysterious sightings off the East Coast.

The sightings took place four to five years ago, and the article did not explain why the guidelines, originally issued in 2015, were updated earlier this year.

The Navy pilots will be part of a new History Channel series, “Unidentified: Inside America’s UFO Investigation.” The N.Y. Times story, which was widely circulated this week, represented a publicity coup for the network. 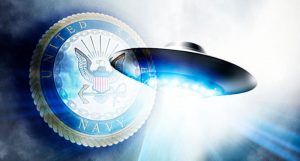 The newspaper says pilots based on the aircraft carrier Theodore Roosevelt saw the objects — some of which they described as spinning like tops and reaching 30,000 feet — during the summer of 2014 through March 2015 in training exercises off the Atlantic coast from Virginia to Florida. In 2014, a F/A-18 Super Hornet pilot reported nearly colliding with one. Two pilots were quoted by name in the story. They said they began to see the objects after receiving upgraded radar systems.

“People have seen strange stuff in military aircraft for decades,” Lt. Ryan Graves said. “We’re doing this very complex mission, to go from 30,000 feet, diving down. It would be a pretty big deal to have something up there.”

The N.Y. Times story includes grainy video captured by the plane’s camera. The Navy adjusted its reporting methods for what the military calls “unexplained aerial phenomena” following the Roosevelt incidents.

“There were a number of different reports,” said Navy spokesman Joseph Gradisher, adding that although some cases could be commercial drones, in regard to others, “We don’t know who’s doing this, we don’t have enough data to track this. So the intent of the message to the fleet is to provide updated guidance on reporting procedures for suspected intrusions into our airspace.”