France is threatening to cut off power to Jersey

A major row has erupted between Jersey and France over post-Brexit fishing rights.

Tensions between Jersey and France escalated following the introduction of a new post-Brexit law on May 1, 2021.

It means French boats fishing off Jersey – which is under Britain’s protection – now need a special licence from the Jersey government.

Indicative of the “deteriorating situation” outside the British island of Jersey is a video that came to light and shows a 10-metre French trawl hitting on a British boat.

Jonathan Ruff’s boat was hit in the stern by the French ship Lasgot as it went out to sea to face the dozens of French “invaders”.

France is threatening to cut off power to Jersey, which receives 95 percent of its electricity from France through three undersea cables, in retaliation for the fallout.

One of French President Emmanuel Macron’s key allies, Maritime Minister Annick Girardin, told French MPs: “We are ready to use these retaliation measures.

A UK government spokesperson described the threat as “unacceptable and disproportionate”.

They will monitor the situation and also protect the island’s 100,000 citizens who depend wholly on imports for food, medicine, and even electricity. 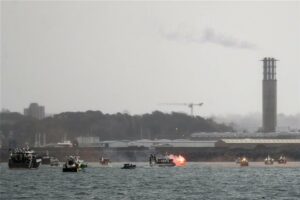 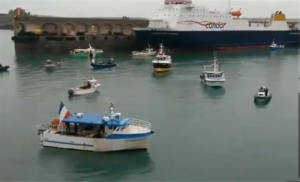 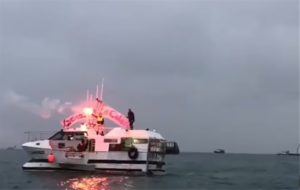