The Greek government through its spokesman Stelios Petsas, fiercely rejected on Friday evening a recent report of the German magazine “Der Spiegel” according to which an illegal immigrant had been shot dead by Greek soldiers while attempting to cross the borders to Greece at the Evros river in the recent organized Turkish attempt to destabilize Greece and Europe two months ago.

As there are no facts nor evidence that Greece’s actions during that time led to any loss of life at the border, Petsas recalled his March 4th statement in which he had again called out Turkey’s claims as “fake news”. 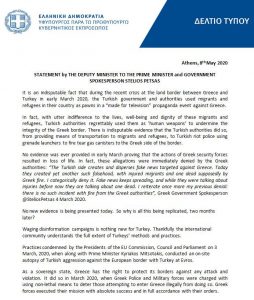