Contacted by Naval News, a Naval Group spokesperson declined to comment on the information.

It has been a known fact since about 2008, that the Hellenic Navy is looking to procure new surface combatant, primarily for Anti Air Warfare (AAW) missions.

Greece has been facing head winds with this plan ever since, due to the financial constraints. While France was hopping Greece could use some of the European bond money for the financing of the frigates, this is no longer possible according to Naval News’ sources in Greece: This money is set to be used to pay back IMF loans in advance (allowing the Hellenic government to save on interest rate). 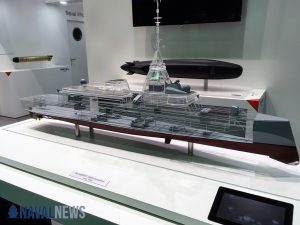 In order to find a solution to this deadlock, according to Doureios, France asked the Greek government for a kind of “proof in writing” that there is truly an interest to procure Belharra frigates. Hence the LOI from the procurement agency. This LOI will now serve as a firm interest for the French side to look for financing from financial institutions for the procurement of the two frigates.