Greece has scooped another medal at the European Championships with a stunning performance by gymnast Lefteris Petrounias, Greece’s own “lord of the rings”.

He claimed a fourth consecutive gold in Glasgow on the still rings with an impressive final display on Sunday, racking up 15,466 points.

Petrounias’ win adds to an excellent championships for Greek athletes which has seen wins for male and female competitors across a range of track and field events. 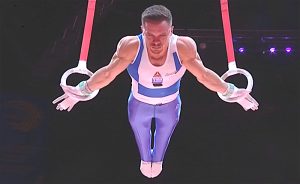