The first six French Rafale fighter jets are scheduled to be in the Tanagra airbase by the end of the year, while the training of the Greek pilots in France is in full swing.
On Wednesday, July 21, 2021, at the Bordeaux-Mérignac Air Base, the French aeronautical company Dassault will deliver to the Greek Air Force the first of 18 Rafale fighter jets that Greece has bought. About 10 months after Prime Minister Kyriakos Mitsotakis announced the decision to acquire 18 French twin-engine fighter jets, the first two-seater Rafale, painted in Greek colours, will be officially received from Athens. 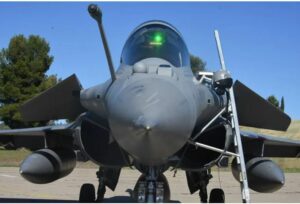 The first six used Rafale jets which are currently in service with the French Air and Space Force (AAE), are scheduled to be delivered to the Greek Air Force by December 2021, at the rate of one aircraft per month. The first Greek Rafale will not fly to Greece immediately after its official delivery. The plan, according to the agreement between Athens and Paris, is to transport all the first six used Rafale with the Greek colours at the end of the year to 332 Squadron at the base of Tanagra. The first six French-made twin-engine aircraft will remain at the Mérignac Air Base in Bordeaux until the end of 2021 to continue the training of pilots and technicians selected. 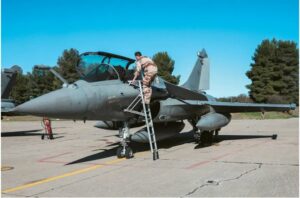 The training of the first four Greek pilots on the French aircraft has progressed. After about six months in France, the Greek “top gun” pilots are already flying to get familiar with the new weapon systems the plane is fitted with.

Four more Greek pilots are currently at Mérignac Air Base, the second group of pilots trained on the Rafale, who are in the first phase of their flight training with the twin-engine fighters. After completing their training, the first eight Greek pilots will gradually begin training other Greek pilots. 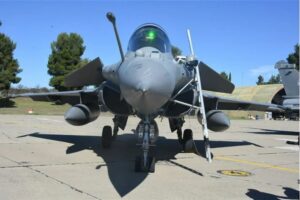 In France, along with the pilots, there are about 15 Greek technicians who are being trained on matters of maintenance of the most modern European aircraft, so that by the end of 2021, when the first six fighters will fly to Tanagra, they will be able to ensure the safe and ready availability of the fighter jets. 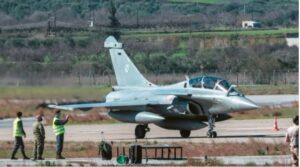 The inclusion of the powerful fighter jets in the Hellenic Air Force will substantially raise the level of the country’s deterrent force against any enemies over the Aegean Sea. The new very large range of the Rafale – 2,800 miles – the much larger fuel capacity, the two engines first introduced as an Air Force fighter system giving higher survivability than the F-16 and Mirage 2000- 5, its extremely powerful electronic scanning radar, and the ability to carry two Exocet missiles will create an aerial “umbrella” over the eastern Mediterranean, rendering any enemy ship a potential target in times of conflict. The Rafale has a longer range than the anti-aircraft weapons carried by warships of neighbouring adversary countries.