The cafe and eatery owners said they were satisfied

It was the second day of reopening of the restaurants and cafes in Athens, and the sunny weather was perfect for the customers to enjoy their day.

The same images could be seen in Thessaloniki, where the shops of the centre, the coastal Nikis Avenue, and Ladadika were full of people. Similarly, the nearby coastal destinations of the prefecture, such as Asprovalta, Stavros, and Michaniona. The only exception may have been most of the restaurants in Halkidiki that are waiting to open after the 15th of the month when inter-regional movement wi be allowed. 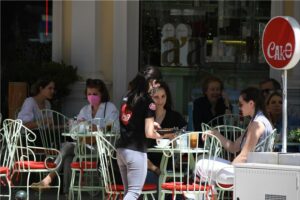 Professionals from yesterday say they are very satisfied with the movement of customers and hope that things will go even better when tourism opens and when the epidemiological situation in the country begins to improve even more. 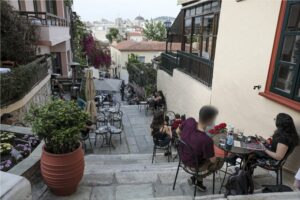 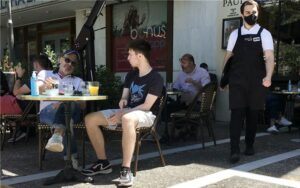 Greek restaurants and cafes reopened their terraces on Monday after six months of pandemic shutdown, with customers flocking to soak up the sunshine and a return to “normal life”.

The reopening was all the more poignant and joyous as it came a day after Orthodox Christians in Greece celebrated Easter when believers mark the resurrection of Christ. Greece has been under Covid-19 restrictions — including a curfew of varying strictness — since November. 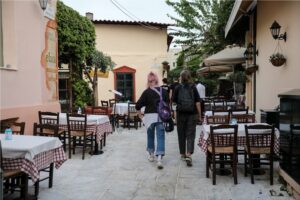 The third wave of the pandemic has hit Greece particularly hard with the majority of the country’s nearly 10,000 virus deaths occurring over the last few months. Non-essential businesses and schools reopened in early April. The video shows Athenians gathering in reopened bars and restaurants until late at night. The Greek government has decided to ease the lockdown and reopen coffee shops and restaurants, as they are one of the main sources of state revenue from tourism. The new measure means that bars and restaurants can be open until 23: 00 at night.