The ship is part of a cemetery that also contains at least seven burial mounds, which are dome-shaped hills of dirt and stones piled on top of a grave

Using radar, the archaeologists could tell there was something big buried beneath the ground in a cemetery in Norway. To their astonishment, what they detected was a 66-foot-long ship–one of the largest Viking ship graves ever found.

The Norwegian Institute for Cultural Heritage Research (NIKU) said that archaeologists discovered the anomaly in Østfold County. The ship was buried about 1.6 feet beneath the ground, they said in a statement. Outlines of the keel and the first few strakes, or lines of planking, were visible in the radar scans.

The leading theory is that the ship was buried more than 1,000 years ago to serve as the final resting place of a prominent Viking king or queen. 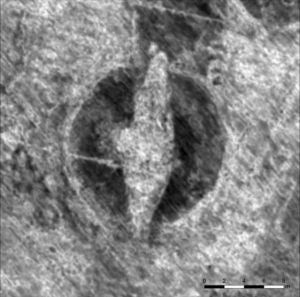 Experts say intact Viking ship graves of this size are rare. “I think we could talk about a hundred-year find,” said archaeologist Jan Bill, curator of Viking ships at the Museum of Cultural History in Oslo, in an interview with National Geographic. “It’s quite spectacular from an archaeology point of view.”