Have you ever been on a date where your partner is more interested in your food than their own?

If you are particularly picky about your food nothing more annoying than someone lifting a couple of chips from your plate without asking. 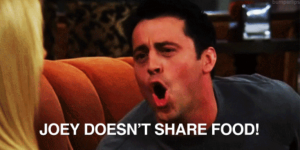 Whatever your opinion on the subject, science may have just proven that sharing food is a good thing, especially if you are looking to bond with someone or show affection.

A study by Proceedings of the Royal Society, Biological Sciences has found that sharing food with another person releases oxytocin, a hormone often associated with the bonding process between mother and child.

The hormone can also be present in relationships and tights friendships.

This discovery was made after the experts behind the study observed a group of chimpanzees.

Oxytocin levels noticeably rose in the chimps when they shared food with each other.

Both the giving and receiving chimp were believed to receive a strong sense of reward from the act.

This feeling was common in other mammals too and it can lead to strong social bonds and more reproduction.

Recent studies show that, in addition to humans, other social mammals [baboons, horses]  form cooperative relationships between unrelated adults, which can last over months or years.

Crucially, there is evidence that individuals who maintain such cooperative relationships have more offspring than those who do not.

Long-lasting cooperative relationships have also been referred to as as strong social bonds, which are characterized by high rates of cooperative behaviours, such as grooming and food sharing.

To extend this line of thought to humans, the study adds:

In the end, the word ‘companion’, (Lat.: com [=with], panis [=bread])  may be more literal than previously thought.