The part-owner of Atletico Madrid celebrated his 10th wedding anniversary

Israeli billionaire and major shareholder of the Spanish football club, Atletico Madrid, Idan Ofer, threw one of the most extravagant parties on Mykonos to celebrate his 10th wedding anniversary with his fourth wife.

The setting of the party was inspired by the Burning Man Festival, held annually in Nevada, USA. The guest list included 700 people – mostly celebrities and VIPs – arriving in Mykonos by jet, helicopters, and yachts.

Among those lucky enough to have access to the party was Greek journalist Petros Nazos, who recorded with Mykonos Live TV camera exclusive footage of the spectacular event. Reportedly, the cost of the event was 5,000,000 euros, with 400 people working hard for three weeks to get everything ready on time.

The Ofer couple chose Mykonos 10 years ago to get married and wanted at all costs to host a big party again on its favourite island.

Idan Ofer, 64, is a business magnate and philanthropist, with interests in shipping, drilling, and mining. 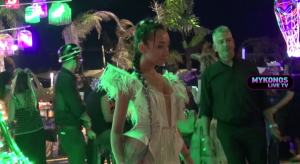 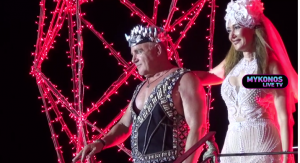 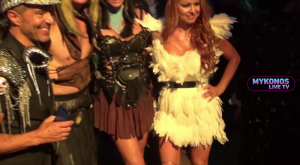 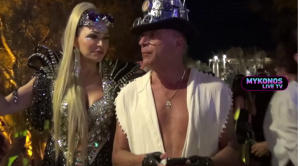