A huge cement Christian cross, which was built on the rocky shore of Apelli, under the castle of Mytilene in Lesvos, in honour of the people that drowned during the recent refugee and illegal immigrant flow, was destroyed on Sunday night. The perpetrators have not been known yet.

The cross was built in early September and caused the reactions of particular members of the NGO “Coexistence and Communication in the Aegean”, which called the cross “offensive to the symbol of Christianity, a symbol of love and sacrifice and not of racism and intolerance”! 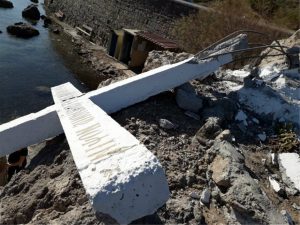 These reactions have in turn caused the reaction of the local population of the island who even became aggressive against the NGO’s CEO as well as others.

Today’s act since it became known, has prompted strong protests from the people of Lesvos, some of whom are preparing to reconstruct the cross.

According to the authorities, the presence of a large number of asylum seekers on the island is a serious factor in creating serious social problems in Lesvos. 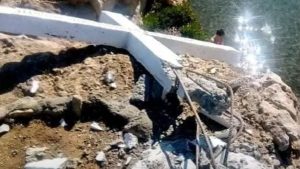