International guests are scheduled to arrive today in Athens

Syntagma Square has been adorned with 200 blue and white flags, in an impressive display, as Greece prepares for the celebrations of the 200th Anniversary of the country’s War of Independence. The Municipality of Athens has decorated and illuminated the central square of the city for the special occasion, as the country will host its international dignitaries and officials.

The program begins today, Wednesday, March 24, with the schedule including the reception of high-ranking guests from abroad who played some part, in the success of the uprising of 1821 and the establishment of the free Greek state. The country will draw global media attention, as many representatives of the press have shown interest in covering the events.

The events kick off with the official opening at the National Gallery and culminate tomorrow with the military parade – The arrival of the Russian Prime Minister Mikhail Vladimirovich Mishustin is expected at 14.00, while Prince Charles is scheduled to arrive in the afternoon with his wife, as well as the French Minister of Defence Florence Parly. 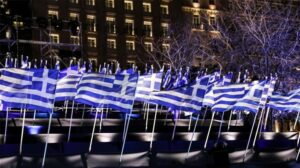 As the host on behalf of the country’s political leadership, Prime Minister Kyriakos Mitsotakis, shortly after 18.20 on Wednesday afternoon, accompanied by his wife Mareva Grabovski – Mitsotakis will receive in the new complex of the National Gallery the President of the Republic Katerina Sakellaropoulou.

Mr. Mitsotakis will address a short welcome, which will be followed by a presentation on the new building and the exhibits of the Gallery by the Minister of Culture Lina Mendoni and the director of the National Gallery, Marina Lambraki – Plaka. A tour will follow, with emphasis on paintings that have as their theme the Revolution of 1821, as part of a special exhibition. 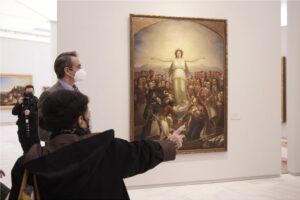 After the “inauguration” of the renovated building of the Gallery, at 20.30 on the night of March 24, the official dinner is scheduled at the Presidential Palace. Addresses and objections are expected from the President of the Republic and the foreign guests.

On the morning of March 25, the Doxology will take place in the Diocese of Athens, in the presence of representatives of the state, political and military leadership of the country. This will be followed by the laying of wreaths at the Unknown Soldier, the playing of the national anthems of Greece and the honoured countries, Russia, Britain, and France, and the inspection of the honourary procession. The guests will then take their seats on the stands for the military parade.